On the ARCTUR Research Geological Lab. web site it is stated, "One of the main principles of Lab is, that creation science should have the greater practical and economic application for expansion of the influence in the world."

Roger Scott visited the website and has recorded his impressions of an abstract [see below] from a "scientific" paper written by two Russian creationist geologists, Alexander V.Lalomov and Serguei E.Tabolitch.

The distribution of gold placers within the lithostratigraphic column is evidence of the accuracy of the Biblical framework of the Earth history. As a rule, the placers are formed on recession of activity of geological processes after epoch of active folding of geological strata and mountain-building. Atheistic uniformitarian theory would predict that placers should be located evenly throughout time. The information presented in the Bible and the understanding of conditions required for placer generation, let us predict the existence of two periods of extensive placers development within the sedimentary sequence - on recession of geological activity after the third day of creation (Period 1) and on recession of activity of a Flood (Period 2). Field investigations show that the extensive formation of gold placers was restricted to only two periods of Earth history: 86 % of placer gold is concentrated in ancient pre-Cambrian strata (Period 1); 13 % - in young Cainozoic and modern strata (Period 2). And only 1 (!) % of placer gold is located in the other layers. Thus, as against of Bible, the uniformitarian theory can not explain an observable situation.

It also confirm the appropriateness of interpreting of stratigraphic records on the basis of a correlation between geological energy and the sequence and nature of the events described in the early chapters of Genesis. Because the main principles of uniformitarian geological column are faulty, creationists need to use new criteria for the stratigraphic correlation and interpretation of the geological data. It seem to us that concept of the distribution of the geological process energy in Earth history is one of the most useful of such criteria.  The placer distribution also gives information about the possible location of significant Biblical geological boundaries, such as the pre-Flood/Flood and Flood/post-Flood boundaries. It allows us to propose that the Precambrian gold placers are the pre-Flood deposits. We also propose that mass-scale generation of placers in Cainozoic strata is evidence that these deposits formed after the peak of the Genesis Flood.  The Bible understanding of a history of the Earth has not only theoretical, but also practical significance. Based on invalid understanding of a history, evolutionary orientated geologists believe presence of gold placers in many divisions of stratigraphic column. Billions dollars were spent for finding gold there, where it is not present (and can not be, according to Bible understanding of a history of the Earth)."

's reply to Roger Scott's critique can be found here.

On first impression, it appeared that the abstract by Lalomov and Tabolitch was from a scientific paper published in Russia. Why then the jaw-dropping phrases such as "[a] theistic uniformitarian theory"? Such statements are totally inappropriate in a scientific paper. Uniformitarian theory is no more or less atheistic than any other scientific concept. One might as well talk about atheistic atomic theory, atheistic concrete-setting theory or atheistic biscuit-baking theory. (How about atheistic fire-fighters? Don't they demonstrate a complete lack of faith by actively fighting fires and not simply praying for rain?)  Science does not invoke miracles and other supernatural actions of deities because it would cause the processes of scientific inquiry, discovery and verification to grind to a halt.

After a little checking, the provenance of this nonsense became clear (I had overlooked the introduction). This was from the Creation Ex Nihilo Technical Journal, a non-scientific and indeed anti-scientific publication. The following comments are of necessity based on this abstract. The full text of the paper is not available on the website.

Lalomov and Tabolitch claim that the "distribution of gold placers within the lithostratigraphic column is evidence of the accuracy of the Biblical framework of the Earth history". In other words, in this instance, the Biblical view is superior to the prevailing scientific view. This is because "uniformitarian theory would predict that placers should be located evenly thruout time". They make quantitative claims. "Field investigations show that the extensive formation of gold placers was restricted to only two periods of Earth history:
86 % of placer gold is concentrated in ancient pre-Cambrian strata (Period 1);
13 % - in young Cainozoic and modern strata (Period 2). And only 1 (!) % of placer gold is located in the other layers." (See Fig. 1) 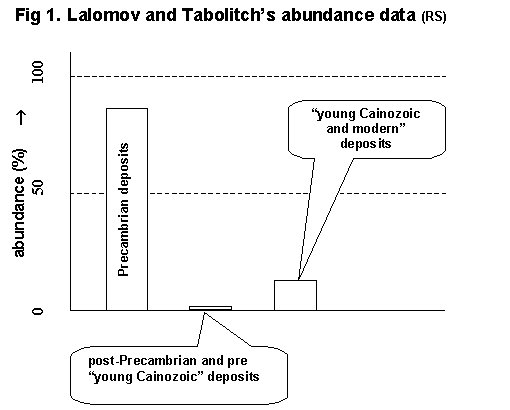 Lalomov and Tabolitch on geology and "uniformitarian theory"? They base their arguments mainly on the geological concepts of placers, geological time and how they interact.

Placer deposits are sedimentary deposits and form on the surface of the earth. The vast majority form in river and beach environments.

The Earth's geological history is divided into four eras:

Fig. 2 shows the time relationships graphically. The figures reveal a clear difference between the two sets of data. 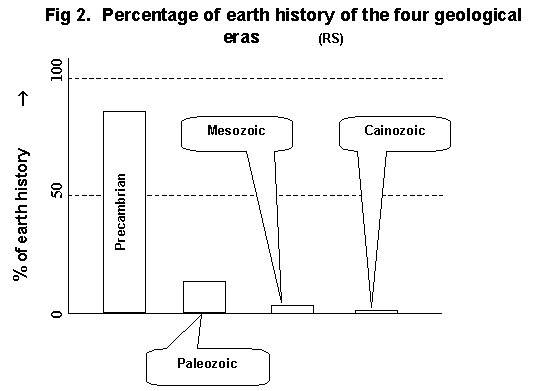 Lalomov and Tabolitch are claiming that the temporal distribution of gold placers cannot be explained by modern geology. Simplifying the discussion to one of placers in general, their data is about what might be expected by a modern approach. As Peter Barrett has pointed out, about 87% of earth history lies within the Precambrian, so there is no surprise there. We would expect to see a gold placer abundance of about 87% or less.

As for "young Cainozoic and modern strata", many of the post-Precambrian deposits currently known would be expected to have formed late in the Cainozoic i.e. closer to the present day. (These will be called "recent deposits".) The reasons are as follows:

(See Fig. 3) This is precisely what Lalomov and Tabolitch have reported. They have based their critique of geology on these data. Yet they are roughly what a modern understanding of geology would predict. Their case therefore appears very tenuous. 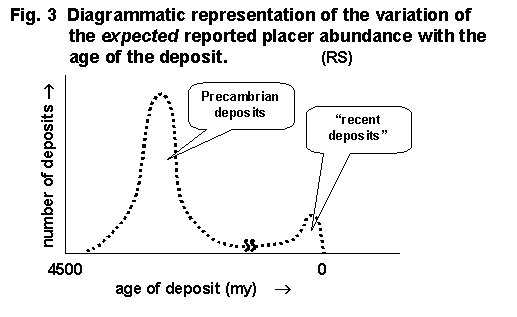 "Placers are the result of mechanical concentration whereby heavy, chemically resistant tough minerals are separated by gravity from light, friable minerals." (Hagner, A.F., in Lapedes, Daniel N., (ed), McGraw-Hill Encyclopedia of the Geological Sciences, (1978), page 553.) A typical deposit would be formed by running water such as in a stream or on a beach. The discussion will concentrate on placer deposits formed by river action. Such deposits would be expected to form wherever there are rivers eroding rocks and then depositing sediment downstream. Such erosional and depositional activity would be at a peak for a period of time after a phase of major mountain building. (Mountains such as the Rockies and Andes induce precipitation and run-off is relatively rapid. Deposition occurs when the velocity of the water is checked in some way.)

The second error of Lalomov and Tabolitch is a more general error. They are charging modern geology with an extreme application of the principle of uniformitarianism. Naturally they find it guilty as charged. Unfortunately for them, they have mounted a straw man argument. Modern geology does not operate as they suggest.

In modern geology, a strict, absolutist application of uniformitarianism, especially the slow and uniform aspect, is no longer acceptable, (if indeed it ever was). Geology is now based on the principle of actualism. (Schwab, Frederic L., in Lapedes, Daniel N., (ed), McGraw-Hill Encyclopedia of the Geological Sciences, (1978), page 296). This principle "accepts the basic premise of uniformitarianism", that the laws of physics and chemistry are constant over geological time but also "proposes that the rate and intensity" of geological processes can vary greatly over time.

No sensible geologist applies uniformitarianism concepts blindly or absolutely in the way alleged by Lalomov and Tabolitch. The following three examples are an attempt to show why.

The principle of uniformitarianism is of course crucial in these inferences. When one observes (in the present) a large conical structure, roughly circular when viewed from above, obviously composed of rock and featuring a central depression, the normal human response is to compare it with similar features in the memory bank and conclude that he or she is looking at a volcano. The conclusion – surely correct much more often than not - is that the structure was constructed (in the past) by volcanic activity. Information from the present has been extrapolated into the past. This is the essence of geology and it is guided by the principle of uniformitarianism.

So the principle of uniformitarianism lives on, but not in the strict, absolute sense of everything proceeding constantly and smoothly as claimed by Lalomov and Tabolitch. As in all science, judgement is required. Not one rational geologist would expect a perfectly uniform distribution of placers thru geological time. Then why do Lalomov and Tabolitch claim otherwise? The most obvious reason, given the tenor of their abstract, is that they want to undermine modern concepts of historical geology. If so, this goal is grounded on nothing more than a religious belief. This inept modus operandi has no part whatever in science, as it makes science unworkable.

"The placer distribution also gives information about the possible location of significant Biblical geological boundaries, such as the pre-Flood/Flood and Flood/post-Flood boundaries. It allows us to propose that the Precambrian gold placers are the pre-Flood deposits. We also propose that mass-scale generation of placers in Cainozoic strata is evidence that these deposits formed after the peak of the Genesis Flood."

Geologists have proposed a large number of geological system boundaries. The most well-known is the KT boundary. It separates rocks formed in the Cretaceous and Tertiary periods. It has complete acceptance in geological circles. If Lalomov and Tabolitch are able to produce evidence for a similar boundary, this time between the Noachian Flood deposits and underlying rocks on a region-by-region and a continent-by-continent basis, they will be the first geologists to do so. They will also become the most famous geologists in the world (for a while).

The failure of creationists generally to identify the base of the Noachian Flood deposits is significant. The most reasonable explanation for this failure is that these deposits do not exist. The creationist claim for a world wide flood is made in the absence of any theoretical or empirical foundation.

No rational geologist accepts the concept of a world-wide Flood, recent or otherwise. It is a conviction based again on nothing more than a religious belief. Fundamentalists, however, continue to repeat this spurious claim ad nauseam. (This ruse may be a contemporary example of the big lie tactic of Dr Goebbels. Thankfully they have not done nearly as much damage as the Big Lies of the master. But damage there is. Mainstream scientific concepts or fields of endeavour such as evolution, the geological time scale and cosmogony still struggle for proper recognition in a number of educational districts or regions, particularly in the "Bible Belt" of America.)

As is typical of creationists, Lalomov and Tabolitch misunderstand and misuse science. A central strategy of "creation science" is to create a favourable impression among their largely scientifically illiterate supporters. It is vital that they APPEAR to be using science to support fundamentalist interpretations of the Bible. This produces feelings of approval and satisfaction in the minds of no doubt well-meaning but ignorant followers. In turn, this greases the way for their donations of money to the creationist cause.

Such a paper as produced by Lalomov and Tabolitch would have no chance of publication in a peer-reviewed scientific journal. It is virtually devoid of merit. At best it would be informally circulated within scientific circles as a curiosity, an example of people who have an adjustment problem with the realities of the modern world.