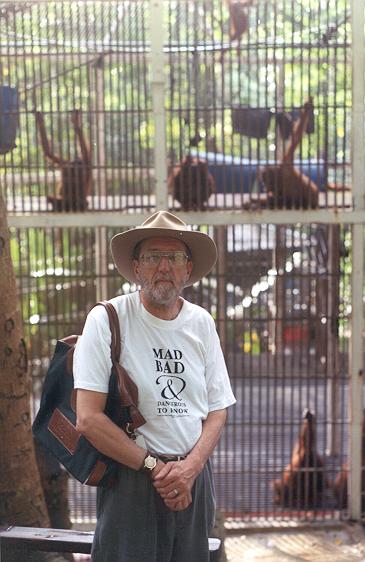 Dr Colin Groves received his PhD in 1966.  He has held fixed-term appointments in the University of California and in Cambridge University before migrating to Australia to take up a post in the A.N.U., Department of Archaeology & Anthropology (formerly Prehistory & Anthropology) where he is now Professor, Biological Anthropology.

Dr Groves has long been a flea in the creationist ear and has written many scholarly papers highlighting their pseudo science, some of which are reproduced below.

From Ussher to Slusher, from Archbishop to Gish:
or, not in a million years... (several articles)

Did Ancient Humans Live Millions of Years Ago?

In Six Days: Why 50 Scientists Choose to Believe in Creation

Getting Desperate
AiG has attempted to refute the factuality of a leading article published
in Time magazine on August 23, 1999.  Colin Groves points
out how, as usual, they got it wrong

Science of Today and the Problems of Genesis
A review

The following papers by Dr Groves are general anthropological papers and are not necessarily aimed at refuting creationists' pseudo science.

Extended Family: Long Lost Cousins (off site)
"The author of the landmark Primate Taxonomy, Colin Groves is formally known as a Professor of Biological Anthropology at the Australian National University, but he has been acknowledged as 'the senior statesman, philosopher, and historian of primatology.' With his new book Extended Family, Colin Groves has created a work which is both unique to its field and an essential prerequisite — a compact history of the Western world's gradually deepening awareness of the primate order."