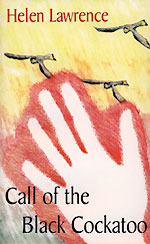 Call of the Black Cockatoo

Call of the Black Cockatoo is a novel based on the extraordinary prehistory of Tasmania, where the southernmost human beings were marooned for 11,000 years.  There are actually two parallel stories; a short pithy account of a team of anthropologists exploring a cave where a human bone has been found, and a longer saga of those first Tasmanians who crossed Bass Strait on the land bridge from the Australian mainland.  During the lifetimes of the people in the story, this land bridge completely disintegrated. The marooned inhabitants were quite numerous, living in every habitat; coastal, midland plains and even the mountainous southwest where there were melting glaciers. These people mined ochre, used stone and bone tools and practised cave art.

Six modern anthropologists investigate human, animal and plant remains in a cave in the mountainous part of Tasmania.  Geoff, an associate professor, is patronising towards Julia, a new Ph.D, taking her for a dilettante because she has a vivid imagination and amuses herself by creating a detailed story of the lives of the ancestral humans she is studying.  Antipathy turns to love between the two amidst professional bickering, a serious accident involving a Search and Rescue helicopter and media questioning as to whether this sort of enterprise should be a drain on the public purse.

Julia's saga tells of a party of prehistoric mainlanders, the Werri, who cross the land bridge and subsequently find themselves isolated. A child, Gili, born on this journey, is in love all her life with the hero, Luka, then a boy of eight. The Werri trek to the mountains where they team up with another tribe, the Yalambi.  The young Yalambi women mine ochre for art-inspired magic, which necessitates that they take a powdered fungus to prevent pregnancy.  Sinister undercurrents in the Yalambi are offset by the basic decency of the Werri Chief, Benwerrin, the hero Luka, and the child/woman who loves him but is denied the kind of love she longs for. Though separated by millennia, modern Julia and prehistoric Gili experience that instinctive feminine recognition of their soul mates.

Helen Lawrence was born in Tasmania, and uses her knowledge of human anatomy, Aboriginal archaeology and Tasmanian topography to ground her novel in scientific fact.  Lawrence holds a degree in paleoanthropology from the University of New England in Australia. She had a career in physiotherapy, specializing in women's health. She is also the author of Well-Being for Women (1990) Lothian Books, Melbourne.