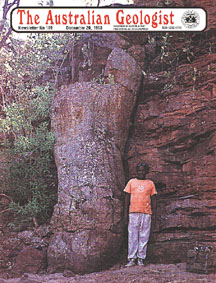 The almost awe inspiring ability of Tas Walker to ignore the obvious is certainly the key to his usefulness to Answers in Genesis and creationism in general. The foundation of Walker's misunderstanding is his dogmatic conviction that the Genesis narrative is literally true, and perfect (see note). Thus, any physical evidence which violates his conception is to be ignored, or distorted (as in variable radioactive decay rates, etc.). Several good examples of Walker's tenuous grasp on reality are on display in the correspondence between several geologists and himself in the pages of The Australian Geologist (TAG) a few years ago and reproduced on Walker's personal web page.

An extended example of pseudo geology prefigured above is a Walker derived pool of dribble (anatomical origin of said dribble left to the imagination of the reader) that can be viewed at Fluidisation pipes: Evidence of large-scale watery catastrophe.

For some reason they [Australian geologists publishing in TAG. gh] had not appreciated that the evidences of large-scale, watery catastrophe in the geological record are just what we would expect from the global Flood of the Bible. Indeed, one vivid illustration was featured on the cover of the same issue of the magazine in which their objections were published [see Feedback from some geologists].

In just the two sentences from his first paragraph quoted above, Walker manages three falsehoods - (1) that TAG should have "appreciated" evidence of something that never occurred, (2) that any geologist would not immediately recognize that basalt flow can be extremely fast, and (3) the fluidisation pipe illustrated could in anyway be competently or rationally interpreted as support for the Noah's flood myth.

The original photo [see above] by David Rawlings, CODES, University of Tasmania, was on the cover of The Australian Geologist accompanied by the following text:

Inverted, cone-shaped fluidisation pipe within the McKay Sandstone of the McArthur Basin, Northern Australia. Numerous irregularly spaced pipes, five meters high and two to ten meters in diameter occur at a similar level along strike within thin- to medium-bedded sandstones immediately above a basaltic sill. The pipes resulted from the entrainment of fluidised, semi-consolidated sand into an upwardly convecting water and steam column, above the hot basaltic intrusion. The upper surface of the pipe is a sharp intraformational erosional surface, indicating coeval sedimentation and sill emplacement.

The site is a very remote part of the Arnhem Land Aboriginal Reserve in the Northern Territory. The man in the picture is George Manyida of Momob outstation, near Bulman, central Arnhem Land.

Walker makes some statements about this photograph that boggle the mind, particularly as one must assume he read the accompanying text. Take for instance this little bit of bovine excrement:

First, the sedimentation rate must have been extremely rapid to produce an unconsolidated, water-filled layer of sand at least 5 m thick over a large geographic area.

There are much, much thicker sediments that are unconsolidated and formed over many thousands of years. This is particularly likely when they are saturated, i.e. Walker's "water-filled". This is freshman, no, High School level geology. A good example in my "patch" is the Capistrano Formation, a late Miocene (these are about 8 million years old) mix of unconsolidated sand and muds that are in places 20 meters thick. I have excavated in unconsolidated 8,000 year old coluvium 15 meters deep that had variable deposition rates. Maybe Walker, the so-called geologist, doesn't know what "consolidated" means? A sandstone or breccia is said to be consolidated if it is well cemented in to a unitary, compact mass. It has nothing what-so-ever to do with the age, speed of formation, or the thickness of a particular formation. The chemical composition and elution chemistry of the sedimentary substrate is what ultimately determines whether a sediment becomes consolidated or not.

But there is more! Walker continues:

The complete thickness of the sill must have intruded quickly over the whole area before the water-logged sediments were able to quench and harden the magma.

Well, the basalt did spread quickly. This is inherently obvious to any competent reading of the picture or the text. However, Walker's false representation clearly means that a basalt flow formed a layer or strata that was then incorporated into a sedimentary column by being buried. Nonsense! Basalt is extrusive. That is, the molten material is brought to the surface under pressure. That pressure will force the basalt to flow along any feature that exerts a pressure lower than the upward pressure of the basalt. The use of the word "intrusive" in the original TAG text indicated that the basalt flow was injected between a weakly consolidated sediment. Walker continued to use the concept term "intrusive" from the original TAG text, and is consequently accepting the TAG interpretation that the basalt followed along a previously existing sedimentary contact. Either that, or he is exposing his basic inability to understand English as well as geology. But then, based on his own text, Walker has falsely presented this as evidence that a shield flow has covered a large aquatic basin and then coeval sediments have deposited over its surface while the basalt is still molten. This is so contrary to the reality clearly described in his own summary of The Australian Geologist article that one must question either his intellectual ability or his integrity. Since he can write I must suppose that he's not an imbecile. While shield flows are well known, several points in Walker's description of the formation, and those published with the original photograph, render this interpretation impossible.  Then Walker quotes:

The top of the sill has a ropy surface and contacts baked and vuggy sandstone and mudstone, in places brecciated.

Walker has committed his Noah's flood phantasm interpretation to the idea that the basalt flowed rapidly into a marine basin and then was covered (while still extremely hot) by 5 meter sediments that stratified but (due to the still extremely high temperatures of the basalt) formed the observed fluidisation pipes. Walker seems ignorant of the fact that basalt extruded into water forms a pillow structure and as the top of this basalt sill is described as ropy, we can only wonder at Walker's lack of  familiarity with basic geology.

The two further observations are that the contact sandstone is "vuggy" (filled with voids that are mostly unconnected) and it is "in places brecciated." Vugs form by trapped or expanding gases or fluids within the rock forming material. Expansion within consolidated or cemented material will not form a vug rather, the rock will generally fracture. In the present case vugs would form by the expansion of water boiling and expanding within the contact sedimentary layer from the heat of the basalt and trapped by OVERLYING sediment. Now, the vuggy contact was sandstone and mudstone. These are fine grained materials. In nearly all sedimentary columns sequences form with course (large grain) to fine (small grain) sequences. The sediment is described as "a bedded sandstone formation ..." consisting of "medium- to coarse-grained sandstone together with minor fine-grained sandstone, granules, pebbles and basalt." Also, we are told that the contact sediment is "in places brecciated." This means that there are areas of broken, angular material that has been reconsolidated. This would be typical of the base of a common, coarse-to-fine column. If a basalt intrudes into water, rapid quenching forms unique features not reported for the basalt sill of the McKay Sandstone. There is absolutely no way that a basalt could flow "over" the bottom of a water filled basin, and then have subsequently received 5 meters of well bedded sediments while the basalt was still molten.

The obvious scenario is that basalt flowing up in quite the ordinary way through a fault below a catchment basin encountered the saturated, unconsolidated sediment. The base of a well defined coarse-to-fine sequence allowed the basalt to spread laterally. This lifts the superior sediment. One could calculate the pressure of the basalt by determining the mass that was floated. Steam formed vugs along the contact and in places created blowouts through the 5+ meter bed. (Think here about an oatmeal mush pan, or the bubbles forming in your pancake just before you flip it over.) Water can enter the blowout, repeating the process many times like an underwater geyser. Each time this happens, a small amount of the older, bedded sediment is removed enlarging the pipe. Eventually, the basalt sill is too cool to pump the water and the pipe is filled with a fine material. I strongly suspect that somewhere in the column above the top of the extant filled pipes is a bed of the same material that filled them. There also could be an ejecta field. This would indicate the maximum depth of the sediment deposited at the time of the basalt intrusion. The probable existence of these observations is also indicated by a sentence in the original text, "The upper surface of the pipe is a sharp intraformational erosional surface, indicating coeval sedimentation and sill emplacement."

And finally, the fluidisation pipes mean that sedimentation and sill emplacement occurred together, indicating that there was virtually no time between the two processes.

The most charitable reading is that Walker misunderstood the "coeval sedimentation and sill emplacement." in the text written by real geologists. This does not mean that the overlying sediments all formed simultaneously with the basalt sill. This is impossible. Rather, the fluidisation pipes formed by working their way through the pre-existing, unconsolidated sediment when the basalt intruded. Then, as the basalt cooled, the fluidisation pipes were filled with a quite different material than the overlaying, bedded sediments. Walker either is very slow, or he is purposely misrepresenting the obvious facts.

But there is still more! Walker, in his final paragraph, says:

This illustrates how a paradigm can constrain people from seeing the implications of what they observe.

There could not be a more perfect irony, could there?

YES!   Walker goes on, and concludes:

The bigger implication, of course, is that the evidence is just what we would expect from the global Flood of the Bible.

This pitiful exposition of geological ignorance by Walker is like a train wreck, we want to look away, but a morbid fascination keeps drawing our attention, always to the discovery of new error. It seems that a shining light of the creationist movement is a very dim bulb. Or, perhaps I am too kind, for after all, if Walker is not judged incompetent then we must conclude that he is dishonest. I personally would rather be stupid than crooked.

Note:     It should be remembered that Young Earth Creationism is not a necessary component of belief in Christ, although YECs we commonly encounter claim they are Christian. Young Earth Creationism is actually a Bible Inerrancy cult, as witnessed by the Islamic Fundamentalist creation dogmas that are virtually indistinguishable from their Christian Fundamentalist bothers.