"Creationism is not the alternative to Evolution - ignorance is"

"I worry that, especially as the Millennium edges nearer, pseudoscience and superstition will seem year by year more tempting, the siren song of unreason more sonorous and attractive. Where have we heard it before? Whenever our ethnic or national prejudices are aroused, in times of scarcity, during challenges to national self-esteem or nerve, when we agonize about our diminished cosmic place and purpose, or when fanaticism is bubbling up around us - then, habits of thought familiar from ages past reach for the controls. The candle flame gutters. Its little pool of light trembles. Darkness gathers. The demons begin to stir."
--Carl Sagan, "The Demon-Haunted World", pp. 26-27.

"...be on guard against giving interpretations of Scripture that are far fetched or opposed to science, and so exposing the Word of God to the ridicule of unbelievers."
--Saint Augustine

"Evolution, simply put, is descent with modification. This definition encompasses
small-scale evolution (changes in gene frequency in a population from one generation to the next) and large-scale evolution (the descent of different species from a common ancestor over many generations). Evolution helps us to understand the history of life."
--An Introduction to Evolution, from Understanding Evolution (see link immediately below)

(A web site written for teachers but accessible to the general public.  It is intended to provide 'one-stop shopping' for evolution education.  The web site is rich in content, with sections on the nature of science, evolution itself, the different lines of evidence supporting evolution, evolution's relevance to everyday life, widespread misconceptions about evolution, and the history of evolutionary thought.  There is also an extensive section especially for teachers, giving advice on teaching evolution, ideas for lesson plans, ways to avoid confusing students, and answering common student questions.)

More About Charles Darwin, Creationism
and Evolution
(Including a link to the Darwin/Lady Hope myth, essays on creation style education and the compatibility of science and religion)

Ken Ham's Creation "museum"
A repository of the absurd

Creation Ministries International
(Formerly Answers in Genesis, but despite the name change the science is no better)

The Main Issues in the Science/Creation Debate
(Including essays about the age of the Earth, the geologic column, transitional fossils and
radiometric dating)

"This website seeks to promote the teaching and acceptance of the biological theory of evolution by emphasizing one of its great lessons: that life on Earth is one big extended family, and therefore we are related in an exact way to not only every other living thing, but also to every thing that ever lived."

Other Issues in the Debate
(Including several examples of creationist deception, creationist howlers and
teaching evolution)

Creationist Frauds
(Yes, there are many, here are just a few of the prominent ones)

Creationist "Out of Context" Quotes
(Quoting out of context is a well exploited creationist tactic.    Here you will find a few of the most obvious ones.  This page will grow quite quickly as new instances of creationist dishonesty are discovered.)

'Creationism is not the alternative to Evolution - ignorance is'
(a collection of emails and other messages received from creationists and religious fanatics)
CAUTION!  Some of the contents of this page may offend those who aren't
accustomed to vile abuse 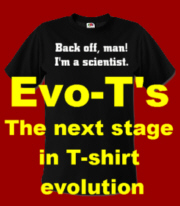 To visit the Talk.Origins Archive's extensive index click on the
'Evolution' logo below

And don't forget the Talk.Origins Feedback

Click on the graphic below and visit
Anti-Evolution
The Phenomenon, Its Proponents, and Its Critics

To debate the issue of evolution versus creation, visit

No Answers in Genesis was launched on
30 September 1998.
Visitors to date:

Intute is a free online service providing you with access to the very best Web resources for education and research. The service is created by a network of UK universities and partners.

This site is affiliated with Australian Skeptics Inc.

In order to minimise spam messages, an extra "@" has been added to my email address.
Please remove one "@" before sending.